ON Valentine’s 2020, Starmedia Entertainment and DSL Events and Production House, in association with Solaire Resort and Casino, are very excited to bring back on one stage the country’s most iconic concert royalties, the Concert King, Martin Nievera and the Concert Queen, Pops Fernandez in “Twogether Again“.

The pair taht captured the hearts of many on and off-stage are finally coming together again for seven spectacular shows on February 14, 15, 17, 18, 19, 20 and 21 at the Theatre at Solaire.

Fresh from their successful 8-city US tour last August that had an equally successful repeat a few months after in December, fans in Manila also clamored for their turn to witness the much-awaited comeback of the Concert King and Concert Queen.

Martin and Pops respectively gained their fame as individual performers, but it was when they both hosted the famous TV variety show “Penthouse Live!” that fans became captivated by their chemistry and followed their on and off screen romance. 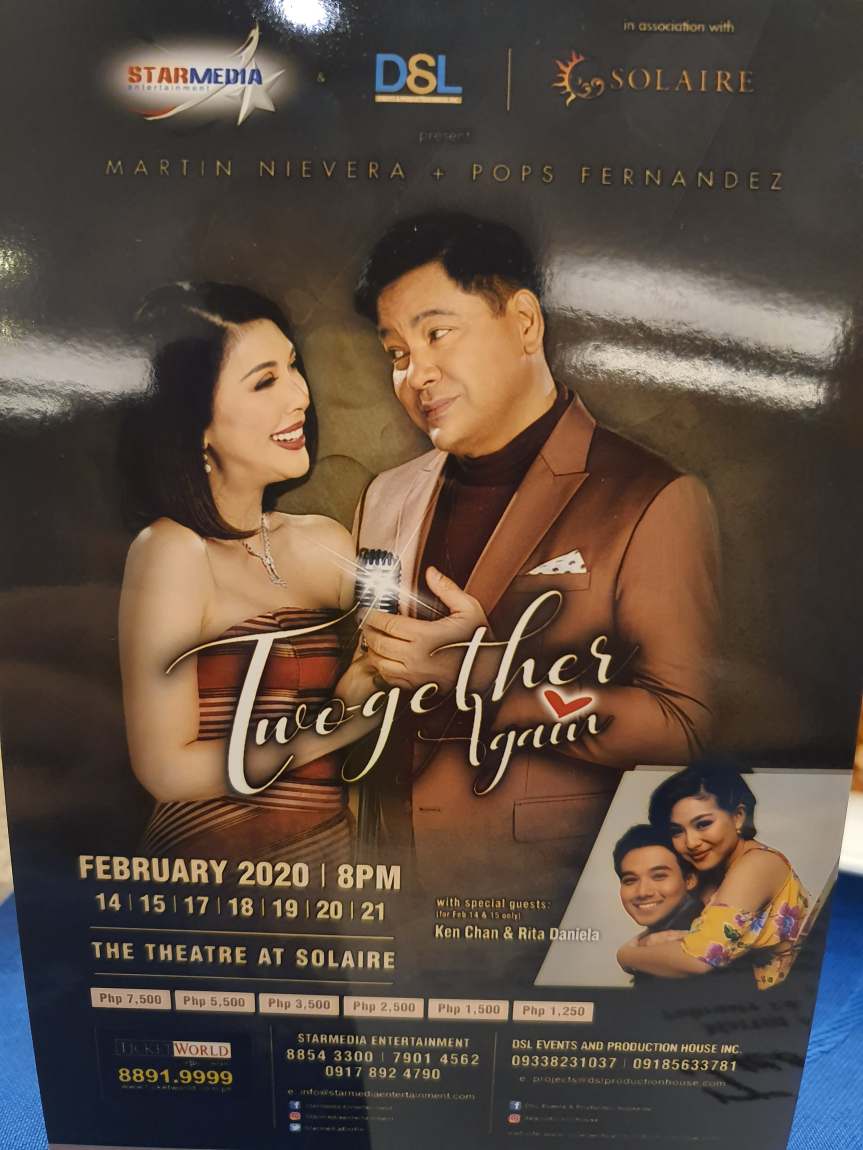 Despite a shift in their love story, Martin and Pops remain very good friends today but they undeniably still have that same magnetic chemistry when they perform.together on stage.

It has been ten long years since Martin and Pops reunited and headlined a major concert on Manila on Valentine’s Day of 2010 and it’s about time that they come TWOGETHER AGAIN for a Valentine special a decade after.

No doubt, many fans are eagerly waiting and very excited to see this iconic tandem perform together again, live! With grandiose production numbers, their engaging rapport with the audience, and just the “kilig” we all get from the Concert King and Queen, TWOGETHET AGAIN is sure to be atreat for everyone this Valentine’s.

Seasons have passed, things have changed but Martin and Pops still prove that together, they are still Sensational. 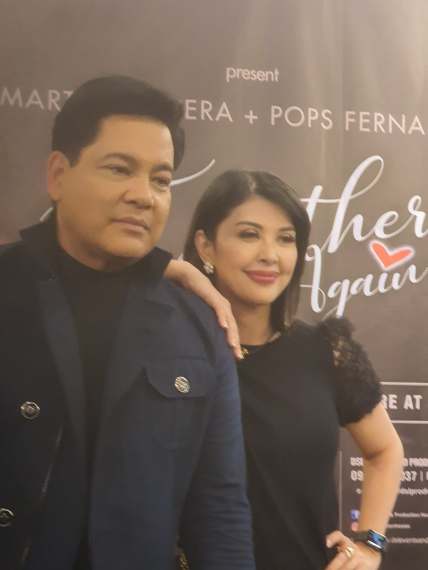 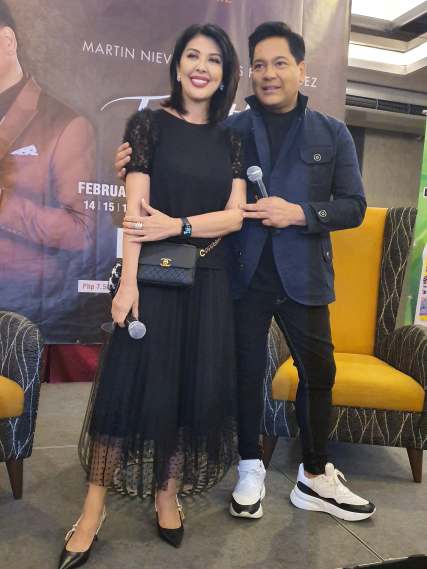 WHO WOULD have thought that after a certain period of being perfect strangers to eacb other when their marriage broke, the Concert King and the Concert Queen will still have this chance to share a special day or days for that matter with the people who have made them stand where they are now-the fans here and abroad.

Pops said, “It really took a while. Kaya we started muna doing a tour abroad first. Sort of a warm-up. To see if the chemistry is still there. And we were overwhelmed with the reception. So we decided to bring it here. ”

“And what we found out, there was no tension when we step on the stage. Even before pa naman wala yalaga tension sa amin. Parang when we’re up the stage, it’s so automatic na. If I gonleft, she goes to the right. Para’ng we still finish each other’s sentences. And it’s hard to find that kind of chemistry.” 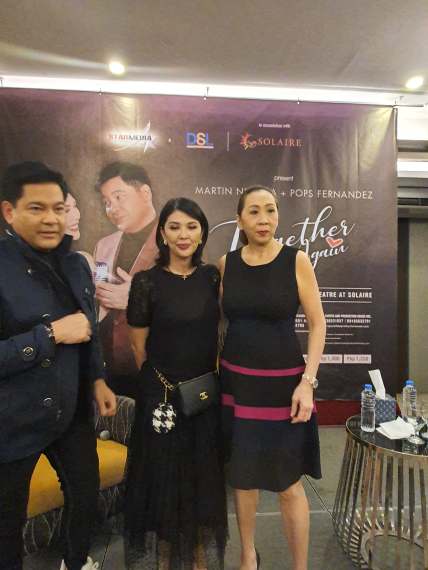 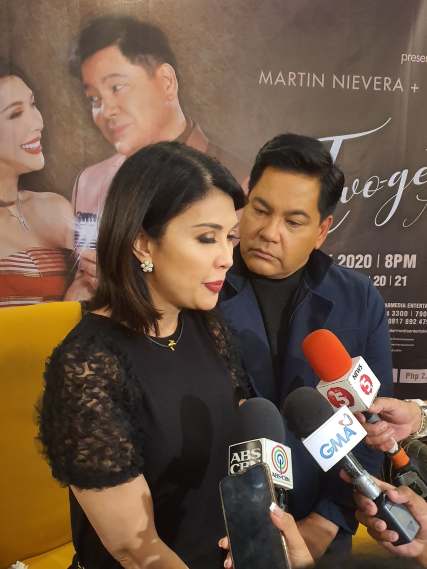 And yes, both admitted that they are the very best of friends now.

“Time heals all wounds,” Pops mused. “True pala ‘yun. The process of recovery was hard though.”

For Martin, “I would follow her on Twitter and Instagram. I just wanted to be part of the restart. Now, look at her. Apart from raising our two kids, yes all by herself, she’s a producer. I just wanr to be part of the “again” career. I can’t do what she does. I can’t go onstage with a headache. I can’t do that when I perform. My job is to bring her back to the stage.”

Is Martin getting a talent fee in the concert.

Having different strokes in life-Martin, Katrina and Santino.

“For a long time, that was a struggle. But sabi ko nga, time heals all wounds. When you see her na in person. Parang nakakagulat. Especially when I saw na Santino. It broke my heart. I was trying hard to be okay…” and Pops burst into tears. 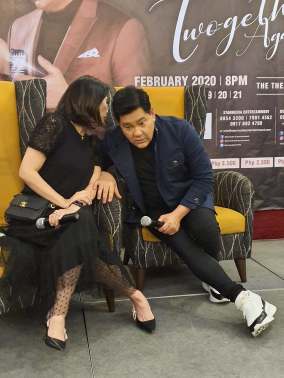 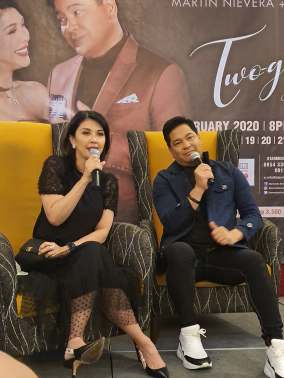 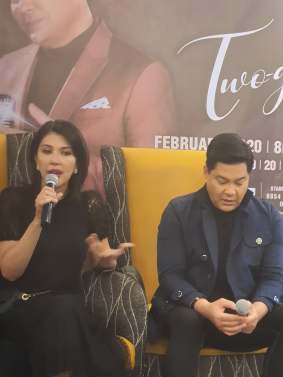 “Christmas. Pops made a big feast for all of us. It’s the modern day family concept. And all credit goes to Pops for bringing us all together
She made a choice to cope with it.”

As Pops would say, “She (Katrina) had difficult times also. So, it’s both ways.”

They will sing songs which endeared them to the hearts of their millions of followers.

As a song would put it, their music will never end.

Even if they had difficulty in saying those lines in a song, “where did I go wrong”, they can never be ‘perfect strangers’ to each other.

See you at the Theater. In Solaire!